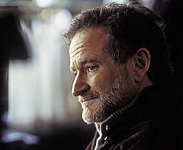 The announcement of Robin Williams’ death shook the world.  It pretty much shut down the internet for the remainder of August 11th when the news broke that afternoon.  On social media, there were thousands and thousands of people shocked, people saddened, people in disbelief, hoping this was yet another twisted hoax that folks with no imagination like to toss out there to fuck with people’s heads.

Other than a few short posts on Facebook yesterday, I reeled in the sadness I felt in fear of it appearing that I was making someone else’s tragedy about me (a peeve of mine when I see it from others).

But I lost it. I had just gotten off work when I heard the news, a radio announcer’s coming through my speakers as I started up my car to go home.  I’m thankful for the timing because I just…lost it.  A flood of grief, loss, for a man I only met once, but admired throughout my lifetime.

I’ve seen a few shitty comments from people who aren’t capable of empathy asking why anyone would even be that upset?  Thankfully, throughout my contacts,  that type of post has been minimal and mostly easy to ignore…though one I did have to address because my adult beverage instructed me to. Comments calling people names for expressing their grief.  “It’s not like you ever met him.  People are crying and shit…it’s not like you can’t watch Mrs. Doubtfire ever again.” and other such bullshit.

I met him.  As did a great many of the comics I worked with in the San Francisco bay area because that was the kind of man Robin Williams was.  Humble, accessible, and kind.

He was kind to me on a day that I needed kindness. I was struggling with my own demons at the time, and, as a comic, I was frustrated and a little burned out.

A few years back, I was invited by Mark Pitta to do a short set at the beginning of the night at the Throckmorton Theater in Mill Valley, CA.  I had heard folks like Robin Williams and Dana Carvey showed up there a lot, but Robin hadn’t been there in a while due to personal things he was going through at the time.  I went with no expectations other than to do my set and go home immediately after.

The show starts, I’m introduced.   And my set…it went well.  That always lifts me up a bit, but I was ready to get my purse and bail as I was the furthest thing away from being up to socialize.

I walked into the green room and there sits Robin Williams on the couch, listening to the show on the sound system in the room.

I did my best not to pee myself right there.

Let me just say…I don’t get starstruck.  Ever. It’s not in my nature, I do not care about any of that.

But this was Robin Williams.

The man who I loved as a little girl when he portrayed Mork, causing me to relentlessly badger my parents until they bought me a big Mork from Ork pin that I wore on my jacket (I never did get those damn suspenders!).

The man who I grew to love even more in silly roles to follow.  An actor who I loved but then fell IN love with when he started taking on these incredible, darker roles with depth that no one expected from him:  The Fisher King, One Hour Photo, Good Will Hunting, Dead Poet’s Society…and so on…and so on…any movie with Robin Williams in it was one I was going to see immediately.

So on the inside I was screaming.

On the outside I was, “Oh hey…thank you.  It felt good up there.”

“Well it SHOULD have, you rocked it.”

I picked up my purse, and he says, “You’re not leaving yet, are you?  Sit down, there’s more to listen to, hopefully they’re funny like you.”

Of course I sat.  Are you kidding?

At the end of the night that I nearly bailed on, I got to go back to the stage and  perform in this improv set called “Totally Looped”, a Mystery Science Theater-esque thing where they would play old movies with the sound off, and, as the characters on screen went about their scenes, the comics on the panel would fill in their own dialogue.

Sometimes it works, sometimes it just doesn’t.  That night was fucking magic.  On one of the clips, Robin played “Boy 1” and I was “Woman 1”, who ended up being “Boy 1’s” mother.    Robin, of course, played Boy 1 as if he was the most spaztastic ADHD boy on the planet.  I’m sure you can imagine.

On what ended up being the very last scene, I end up making what was clearly an incest joke – because I’m me – and Robin laughed and choked on his water…the lights went down.

I felt victorious:  I had just made Robin Williams laugh so hard he choked on his water.

And like an asshole:  I JUST MADE AN INCEST JOKE TO ROBIN WILLIAMS.  WHAT IS WRONG WITH ME?

After we all contained ourselves and closed out the show, I got another unsolicited hug from him and he said, “It was a pleasure working with you, don’t stop.   Just don’t, doesn’t matter what you have going on.  Ok, girly?”

Every once in a while, when I’m feeling like shit about performing, I think of that night.

This was a kind man.   And a man who also wrestled with inner demons. I think a lot of people are “crying and shit” because he’s been a constant artistic presence in their life. Everything from crazy, out-there humor to ridiculously complex, deep, emotional characters that made you feel.  Actually feel.

Some people are crying because they are seeing yet another person succumb to depression, years of addiction, pain.

I’m grieving because of everything I mentioned and the fact that I feel grateful for having shared a stage with an amazing human being.

It’s not about never being able to watch Mrs. Doubtfire again. It’s about feeling a loss in your life by someone who, even if you hadn’t met him personally, affected you on some level.

I do get why that’s hard for some people to wrap their minds around. Not with any empathy, but I get it.

Everyone grieves in their own ways. No one needs to qualify it.

Someone who touched our lives in one way or another committed suicide.

And the one good that is coming out of his death, even if only temporary, is the discussion that is being had about suicide. Once again, like with Philip Seymour Hoffman’s passing earlier this year, we are talking about depression and addiction.

I see the occasional “he took the easy way out” and I try not to react because, clearly, people with this mindset don’t understand.  And good for them, really.  I’m a broken record as I’ve said this before, but that’s fantastic for you if you can’t put yourself in that spot.  If you can’t feel for a second how someone’s pain could steamroll their will to thrive once again.  Good.

That pain all too often comes along with the spark of genius like we saw in Robin Williams.  He isn’t the first beautiful, creative human to succumb to it.  He won’t be the last.

Goodnight, Robin.  Rest well. May you color wherever you are like you colored the world the rest of us were lucky enough to share with you.