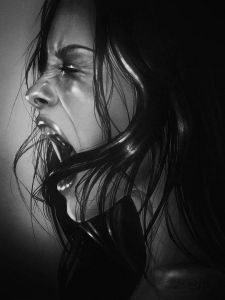 “Why would you want to walk around being angry all the time? It’s really getting old.”

Well, here’s the thing, Chad. We are angry because we are still being treated as if we’re second-class citizens. And please spare me your anecdote about successful women, because, if you do any digging beyond the surface, you will see that across the board women are still getting paid less for the same jobs than men are.

In every company? No. In most companies in most industries? Yes. And that’s fucking infuriating. That’s what’s really getting old.

Does that mean, just because all you see is this “offensive, angry, unladylike behavior” that we’re marching around pissed 24/7? Maybe for some of us and I get that, but for most of us, no. We love, we dance, we meditate, we exist for periods of time intentionally oblivious of the bullshit so that we can recharge. We move about the country and strive at our careers, raise our families if we chose that route, pet our dogs, and are chock full o’ bliss until something reminds us, once again, how far we still have to go and it’s fucking maddening because wouldn’t it be nice to be past that?

Doing anything “like a girl” is still an insult to men. And to women because we are taught that femininity is lesser. We’re still teaching our children this, I hear it all the time.

Our bodies are not considered our own, and we are shamed for normal bodily functions and have been since the dawn of time.

Medical research has all but ignored women until recently. Studies were done on men because women’s “illogical bodies” were not consistent due to our monthly cycle. So, rather than work with that, research on many ailments were only done on men, which is why so many women die from heart attacks, for instance, because our symptoms are wildly different. As my own rheumatologist said to me after I asked her why the symptoms of my autoimmune disease seem to differ dramatically than what’s in the pamphlet, “Women break the rules. They didn’t bother to study what this and other disorders do to a woman’s body, so the medical journals are written about men.”

Women are sent home to suffer because our pain isn’t taken seriously. We’re clearly blowing it out of proportion.

We didn’t have the right to vote until well into the 20th century, black women for decades longer. We were physically beaten down for fighting for this right.

We weren’t “allowed” to own property, to play sports in schools, to run a marathon until just a few years before I was born. We weren’t allowed to have our own credit card, and we were not allowed to say no to our own husbands when they raped us. Being raped by our husbands was nationally legal until 1992. Because we were theirs.

We are killed when we upset the wrong man. Still. Because we are still, for all intents and purposes, considered nothing more than objects to the men who are allowed by their peers to think this is acceptable. Allowed by men who might not completely agree, but “it’s not their place to correct them”.

We know that a heartbreaking number of parents with sons will level them above their daughters. We know that our own friends and family won’t believe us and, even if they do, they won’t care because “let’s look at the big picture”. We’re told our feelings about rapists are political and now’s not the time for it.

When IS the time for it?

We need to be angry and we need to stay angry. We need to ignore calls for politeness and civility and we need to tell those who admonish us for being “so angry all the time” to shove it up their asses because they’re either sitting in a place where they’ve never felt marginalized, or they’re sitting in a place where they think that if they just behave, they’ll be treated like a good girl.

How do you think anything has changed over the years for women? By being sweet? By just asking nicely in a polite tone with a smile?

Don’t let anyone make you believe this. Don’t let someone scold you like a child and show you “how bad you could have it in one of them Muslim countries”, another version of the age old “their are starving children in China” crap that your parents told you to make you eat those vegetables.

This isn’t an off-putting food, this is our fucking lives we’re trying to improve.

Don’t let some shithead point out that, even though there are women elected to office in that country over there, that they’re not allowed to wear a bikini as if that’s the gold standard for equality.

Live your life, enjoy every moment you can. Take days or weeks off of thinking about all the bullshit we need to stay angry about if you need to:  That’s self care and you need to be allowed to breathe, love, sleep, and enjoy your existence. Take a fucking break.

And every little girl who comes along after you is depending on it.